David Miles, son of Gordon Miles, shown in the programme below, provided some fun info on some of the other characters in the Minety Players.

Tony Baugh and Gordon Miles, David’s father, swapped about the  stage manager and electrician roles. Gordon even built the light dimmers from scratch using salt water and movable electrodes in ceramic soil pipes (can you imagine doing this in the village hall today?!).

Phil Miles was David’s granddad and Angela was  Gordon’s younger sister. Robert Martlow was a senior pathologist at the Swindon hospital, so quite useful in the case of an Agatha Christie murder!! His informed advice to Gordon was not to smoke (which he didn’t) and drink only in great moderation (also heeded). Jack Beasant was the postmaster.

Do you have any interesting historical info you can provide? 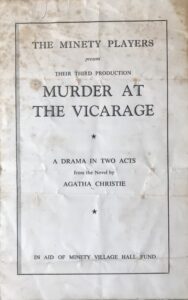 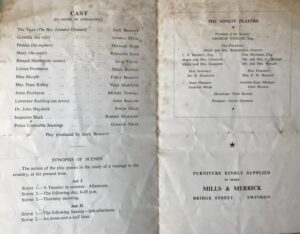